View source
watch 01:27
What is Summoning?
Do you like this video?
Play Sound

Saint Quartz summoning is used to summon Servants and Craft Essences of 3-5★ rarity.

Quartz summoning requires either 3 Saint Quartz or 1 Summon Ticket per individual summon, or 30 Saint Quartz to summon 10 cards. When performing a 10x summon (a.k.a. 10-roll), you are guaranteed to summon at least one 3-5★ Servant and one 4-5★ Summon (note: this does NOT change the 5★ rate). You cannot perform a 10-roll with 10 Summon Tickets. After the 4th Anniversary of the JP server a 10x summon gives a free extra roll (becoming an 11x summon) while still only costing 30 Saint Quartz, and doing a 1-roll 10 times on one specific summoning pool will also grant an extra roll from the same pool. The NA server received this update with its 4th Anniversary.

There may be additional splash pages for Saint Quartz summoning during ongoing events or promotions. For any of these summonings, the Servants and Craft Essences available may be different. To check the list of cards in the current summoning pool, tap the Summon Details (召喚詳細?) button in the lower left. This includes Servants that are normally unlocked through the story; limited summoning campaigns may temporarily make them available even if you have not progressed that far yet.

Limited summoning campaigns usually offer a "rate-up" for a specified number of Servants; this does not change the summoning probabilities in the table above!!! The chance of summoning a 5★ Servant is still 1%, but, if you were to summon a 5★, there is a higher chance it will be a rate-up Servant.

Sometimes Servants are released before their main story location has been released. These Servants are temporarily considered "limited Servants," but will be added to the permanent summoning pool at a later date. 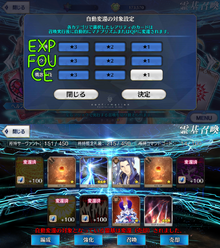 Friend Point summoning can summon any non-limited type of card at 3★ or lower rarity.

As of 7M Downloads Campaign update, Each player receives 10x free summon per day at 00:00 JST. Subsequent summons require 200 FP each and 2000 FP for each 10x. Friend Points can be commonly obtained from Login Rewards, using other players' Servants as support, and other players using your Servant as support.

During the opening tutorial, there is a forced Saint Quartz summoning where players get their first Servant. As of E Pluribus Unum Chapter Release, the players are guaranteed to get a 4★ Servant (from below table) and a 4★ Craft Essence.

NOTE: You cannot obtain a 5★ Servant from the Tutorial Summoning but it is possible to get 2 or more 4★ Servants.

Confirmed Summon (確定召喚?) System, also known as a Rate-Up SSR Pity, is a system that safeguards the players from overspending for a single copy of SSR. When a Master fails to summon the Rate-Up SSR in a given banner, the Rate-Up SSR will be guaranteed on the 330th roll. This only happens once per banner. Any more summons after that will not have any guarantee, but only for that banner itself. 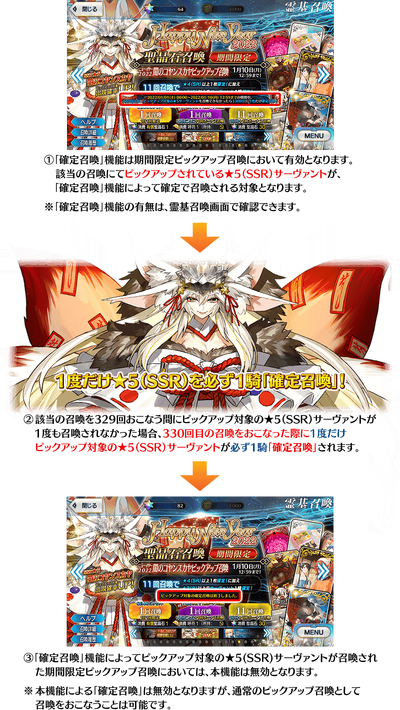 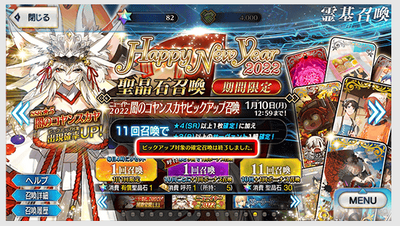