Male
Romani Archaman (ロマニ・アーキマン, Romani Ākiman?), also known as Dr. Roman (Dr. ロマン, Dokutā Roman?), is one of the main characters of Fate/Grand Order. He first appears in the Prologue Story of the game.

Romani Archaman is the Doctor of the Chaldea Security Organization who helps the protagonist as a support from behind the lines. He is the Head of the Medical Facility of Chaldea. 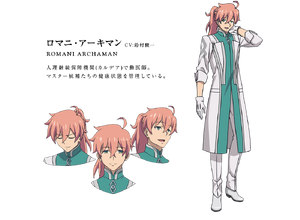 The acting director of Chaldea and dedicated overseer of the Grand Order.

Romani used to be the Chief of Chaldea’s medical team, but after the explosion accident, he has been acting director of the organization. Also known as "Dr. Roman." While he is rather weak struck and bit wimpy, he’s a reliable person who doesn’t mind lavishing labor to make the best of each trip (ray-shift?) of Fujimaru and his team. He is a fan of the virtual idol, "Magi☆Mari."