Ophelia Phamrsolone (オフェリア・ファムルソローネ, Ofiria Famurusorōne?) is one of the seven Crypters, Masters attempting to supplant the Greater History of Man with that of the Lostbelt in Fate/Grand Order : Cosmos in the Lostbelt. She is the Master of Sigurd and was formerly one of forty eight Chaldea Master Candidates and a member of A-Team.

Ophelia enrolled in the Clock Tower's Spiritual Evocation Faculty. Ophelia was recruited into Chaldea Security Organization, she became one of the forty eight Chaldea Master Candidates and a member of A-Team. Ophelia plans to summon a Saber-class Servant, but she was particular with the race of the Heroic Spirit that she was going to be contract with.

The sight of her wearing her eye-patch was noticeable in Chaldea.

Ophelia is said to be quite attached to Kirschtaria and willing to befriend Mashu even on opposite sides.

Ophelia inherited a Jewel-Ranked Mystic Eyes, that allows her to perceive the "possibilities" associated with a targeted existence, and to forcibly cull them, restricting the advancement of events pertaining to the target to a single course. The activation phrase is, "I do not observe thy brilliance".
Her eye functions as a "rollback" phenomena, as if the enactment or deployment of Mysteries were reversed or retrogressed to a reduced state. 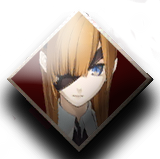 Beyond The Rain Cloud
Community content is available under CC-BY-SA unless otherwise noted.
Advertisement