This article is for the Crypter version of Kirschtaria Wodime. For the

Failure due to insufficient preparation, thick and heavy clothing, Alcohol

Kirschtaria Wodime (キリシュタリア・ヴォーダイム?) is one of the seven Crypters, Masters attempting to supplant the Greater History of Man with that of the Atlantis Lostbelt in Fate/Grand Order : Cosmos in the Lostbelt. He is the Master of Lancer Caenis. He was formerly one of forty eight Chaldea Master Candidates and a member of A-Team.

The leader of the Crypters.

The traitor to humanity who brought forth the “White Earth Phenomena” and erased Pan-Human History.

Though believing to be part of the Chosen People, he is a leader who bases his actions on a logical future.

While he may look to be the calm, collected, cold son of a distinguished noble family, in reality he is a young man who is polite to others and does not wield his authority over them.

In spite of being a believer of holding confidence in oneself, he is not arrogant.

In spite of being cool-headed, he is not cold-blooded.

For the history of humanity up until 2017 AD he is the greatest traitor humanity has ever known. However, it is undeniable that his endgame and ideas which drive his actions will bring with them a beneficial turning point for all of humanity.

Though being in the body of a human, he has created a magic system that is able to defeat servants.

That very same magic has existed since long before the “White Earth Phenomena” occurred within the Department of Celestial Bodies where it was deemed to be dangerous and “In the end though it may be amazing, it’s nothing more than a theory on paper that has no use.”.

He doesn't use Command Seal during Atlantis and Olympus. 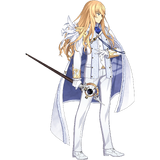