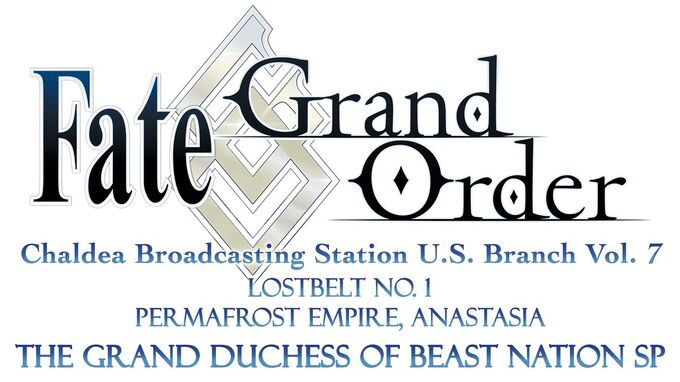 Tune in to "Chaldea Broadcasting Station U.S. Branch Vol. 7 Lostbelt No.1: Permafrost Empire, Anastasia - The Grand Duchess of Beast Nation SP" on Thursday, March 26th starting at 18:00 PDT!
The story of Part 2 is about to begin, and we have an exciting broadcast for you! Filmed in Japan for the first time, look forward to an interview with Part 2 director KANOU YOSHIKI, a talk show with a special guest, and more!

Mashu gets her animation update, and so do Fūma Kotarō, Jing Ke, Kiyohime, Martha, Medea (Lily), and Edmond Dantès.

10 which brings the overall amount to

13 total.
Retrieved from "https://fategrandorder.fandom.com/wiki/FGO_Chaldea_Broadcasting_US_Branch_Vol._7?oldid=791907"
Community content is available under CC-BY-SA unless otherwise noted.