In Fate/Grand Order, the core gameplay revolves around Battles, where the player, as a Master, can make various decisions in order to eliminate all enemies. A quest consists of 1 to 5 stages of battle.

There are 3 types of stages: normal, Fatal Battle, and Grand Battle. Normal stages have enemies of average difficulty, compared to the other stage types. Fatal Battles usually contain at least 1 boss enemy that has a significantly higher level than the normal enemies, which means it has much higher HP and deals more damage. Frequently, the boss will be a Servant, though this is not a hard-and-fast rule. Finally, Grand Battles typically feature a unique boss of the highest difficulty. Grand Battles tend to only take place in the final quests of a Main Quest zone and offer unique, one-time rewards. 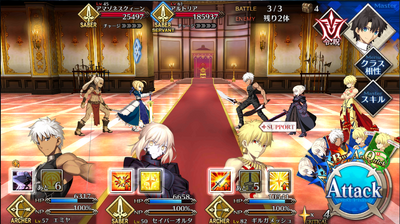 It is always the player's turn first when the stage begins, whether you just started the quest or you have reached the fifth stage of battle.

In the Battle Screen, the player can perform various actions before tapping the Attack button.

Once the Attack button is tapped, the Command Phase begins. Critical Stars are randomly distributed among the 5 Command Cards, excluding Noble Phantasms, with each Star adding 10% Critical Chance to that Command Card. Active Skills can no longer be used, but you can still change targets.

For more information on Chains and Attacks: see Command Cards.

The damage determined by the formula below is entered for each move. What is displayed on the screen is the value obtained by dividing it by the number of hits. The split distribution seems to be different depending on the servant, but generally the damage number tends to increase in the latter half.

In addition to this formula, Card correction, Class correction, Attributes, Flat Damage Up, and random numbers are added.