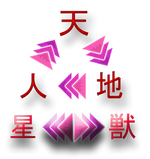 Attributes are a gameplay mechanic in Fate/Grand Order. It works similarly to the Servant class triangle. Each Servant and Enemy has an innate attribute that is both weak to and strong against other attributes. The Attribute relationships are explained from Emiya's Interlude Quest and by Da Vinci during the Story Chapter of London.

These traits are based on why they are a servant, and as thus, can be guessed following these critera:

Earth: Heroes who originate from fantastical, unrealistic myths and legends. Tend to be more monstrous or fanciful, but are not born divine.

Sky: 天, can be read as "sky" or as "heaven" - those who possess a high amount of divinity, sometimes being demigods, or even gods themselves.

Examples: Those who possess divine objects like David and Cú Chulainn, those born with divinity like Gilgamesh and Heracles.

Star: "The Hopes of Mankind" - those who not only did great deeds, but changed all of mankind's destiny.

Beast: Can also be called the Beasts of Calamity or Evils of Man, they are the invert of Star attribute; so, they exist to destroy humanity and threaten the continuation of history.

Please check the links above before asking in the comments.